http://latelequemepario.com/2007/06/08/ ... e-colditz/
Underneath the lantern by the barrack gate
darling i remember the way you used to wait
was there that you whispered tenderly
that you loved me you'd always be
my lili of the lamplight my own lili marlene.
Arriba

"The Fourth Arm is a British television series produced by the BBC in 1983.

The twelve-part serial dealt with secret agents parachuted into occupied Europe during the Second World War, following their progress through initial recruitment and training, and finally their first mission in enemy territory.

The Fourth Arm was created and produced by Gerard Glaister, who had previously been at the helm of other World War II dramas such as Colditz and Secret Army. The serial starred former Secret Army cast member Paul Shelley as Major Hugh Gallagher, essentially a reprise of his Secret Army character, Major Nick Bradley, in all but name"
Arriba

Si Audie yo tambien la desconocia, me entere el otro dia leyendo un foro de series antiguas, yo he puesto la fuga de colditz en el ares y no me aparece nada, seguire intentandolo, un saludo.
Underneath the lantern by the barrack gate
darling i remember the way you used to wait
was there that you whispered tenderly
that you loved me you'd always be
my lili of the lamplight my own lili marlene.
Arriba

"During World War II, as Britain began regular bombing raids on Germany, their airmen were constantly at risk of being shot down, often landing in occupied countries such as Belgium. As the Belgian inhabitants came to terms with being under German occupation, small pockets of resistance began to grow. Often, this resistance involved petty acts of defiance such as blocking the roads or railtracks, or bombing weapons silos. But a more subtle resistance existed in the form of the escape routes - Belgian-run chains of people who harboured airmen and helped them escape north into Scandinavia or South, through France, into Spain, where the airmen would be met by British agents and helped back to Britain. The lifeline volunteers risked their lives constantly - if the Nazis ever caught one of them, they would be tortured until they betrayed their colleagues, or else shot on the spot as traitors. But still they continued to help the Allied airmen escape capture throughout the war in the hope that their actions would help bring the war to an end, and their oppressors to justice. It is believed that not one RAF airman managed to evade capture and return to the UK without help from the evasion lines. Over 3,000 lives were saved thanks to the bravery of these people.

This was the setting of one of British TV's most riveting dramas - Secret Army.

The Secret Army (as it was originally known) was created by Gerard Glaister1 himself a former RAF pilot who survived over 100 sorties - an incredibly rare achievement. Having already produced the hugely successful prisoner of war drama Colditz a few years earlier, Glaister was in a strong position to produce a story closer to home and, so he later claimed, he actually pitched the concept to the controller of BBC One during a journey in a lift in BBC Television Centre. By the time the lift had reached its destination, Glaister had been given the go-ahead. Glaister managed to arrange a co-production deal with Belgian TV station BRT, which gave them access to location filming in Brussels. Fortunately, the BRT executives were not granted any control over the editorial content of the show, which would attempt to depict some of the German officers almost sympathetically rather than demonising them as every other drama had done since the end of the War" 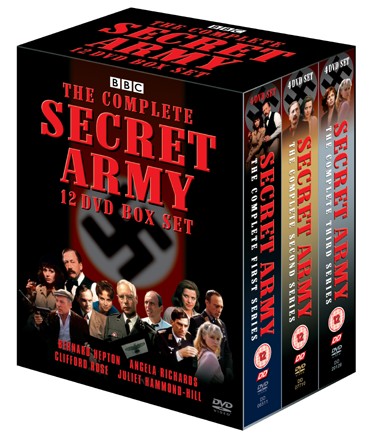